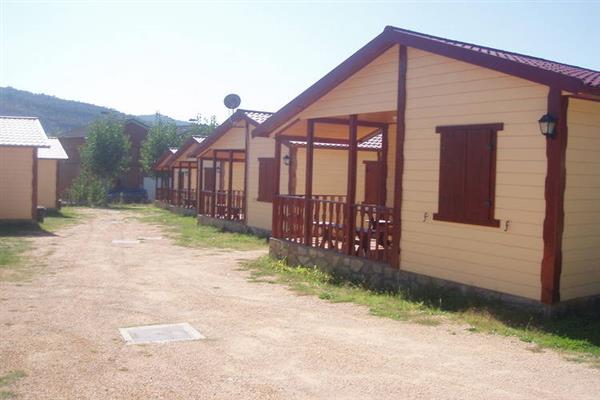 Pleae note: the description of Bungalow La Puebla de Roda (Isabena) Pyrenees was written in the local langauge and converted into English.
Holiday Park Isabena is located on a beautiful location in the midst of the beautiful Aragon region in the beautiful valley of the river Isabena. The park is home to centuries old oaks and olive trees. You'll not be wanting for anything here, this park is a perfect spot for all ages. Firstly, to explore the area, and secondly, just to relax. The very friendly owners will do everything they can to make their guests feel at home. There are various activities organized from cocktail evenings to lively music evenings. The owner is a passionate musician and will take the microphone himself on many evenings. If you play an instrument, bring it with you. For a cool down you can take a dip in the swimming pool. The wellness house, finished in 2011, offers you relaxation and enjoyment of the saunas and Turkish steam room. In addition to the separate areas where there are bungalows, there is a campground on the park. For lovers of culture, idyllic villages and pristine nature, this region is highly recommended. The Olvena Gorge, the Loarre fortress, a wine tasting in Bodega Lalanne (the vintner is the main supplier of the Spanish royal family), a walk through the original Arabian village of Alquezar, the Guara national park and the many waterfalls in the Ordesa y Monte Perdido national park are only a few options for day trips. In addition, there are various sports activities organized from the park. In short, an ideal holiday location for all ages!


Find out more about Vakantiepark Isabena


Find out more about Vakantiepark Isabena (ES-22482-03), including prices and availability...


Vakantiepark Isabena on the map

= Vakantiepark Isabena on the map

These cottages are all close to Vakantiepark Isabena


Find out more about Vakantiepark Isabena, including prices and availability...

Prices and availability at Vakantiepark Isabena